Start on route to summit of Cottonwood Mountain, segment 8 mile 28 of 36.

The view coming down Cottonwood Mountain in the early morning is a good start to the day.

I heard snow pellets hit the tent last night, but it was melted in the morning. Here is proof, as snow pellets piled up in spots along the trail. 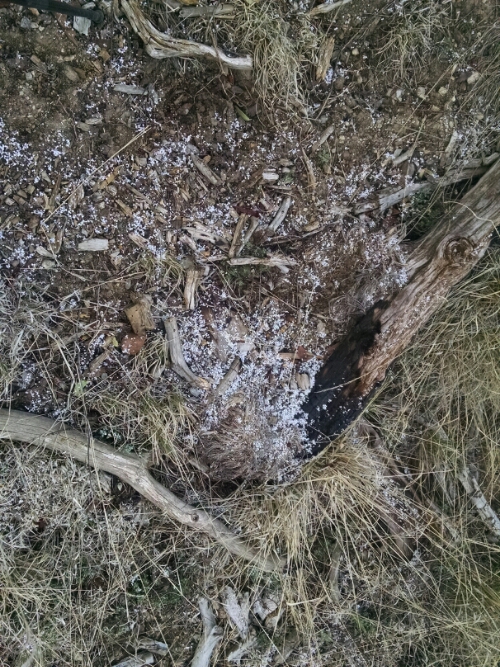 The trail uses FR 677, a 4WD track nearly invisible in places from neglect. 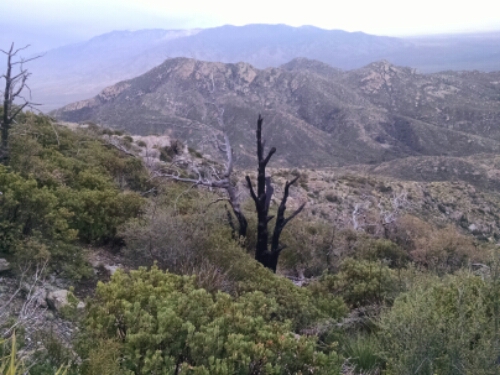 Finally I get to Klondyke Road, which I will follow for a couple of miles before heading toward the Pinaleno Mountains, capped with snow.

A couple of weeks before starting me hike, I cached food in three places, including Klondyke Road. (Since I live in the general area, in New Mexico, I could bury all three caches and return home in one day. Other hikers mail packages to themselves to a now-closed country store a few miles away in the ghost town of Klondyke, where the owner puts the packages in a locker in back. Since I was traveling nearby burying caches anyway, my way seemed better. The other caches were to avoid hitchhiking. ) 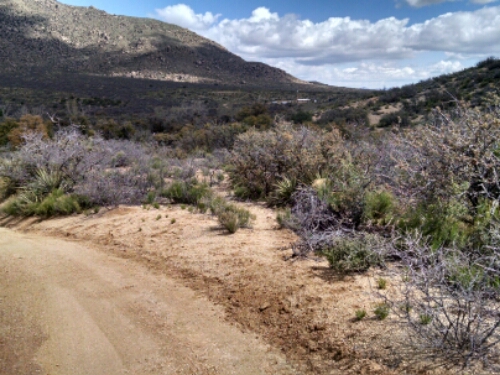 The last couple of days have been hard hiking, so I am looking forward to food treats included in the food cache I buried along this road.

I am stunned when I get to the location of the cache. Someone has taken my food!

They left the hole unfilled where I had buried a metal ammo box, a few dozen feet away from the road, near the base of a utility pole. There are no digging or drag marks, as from an animal–this was human action. A couple of water containers I had left nearby remained untouched. In hind-sight, I realized that not burying the water was an error, that lead the culprit to investigate the area and notice a couple of rocks that looked suspicious and find my treasure. I searched in a spiral pattern to see if the cache had been hidden nearby as a joke, but no luck. Some faint boot prints nearby likely belonged to the perp.

What a quandary. It is sixteen miles along a dirt to the main highway, and another several miles to a town with groceries. Would I have to hike the whole way, or would a ride come by? Could I somehow resupply and make it back here? My family lived four and a half hours away, so I could get picked up and restart the hike later. Back home some developments were in progress where they really needed my assistance for several days. I never planned to hike the GET through in one go, but to break it up in three or four sections, still in one calendar year to count as a thru-hike. But it would really be sweet to have completed the hot Arizona portion and come back later starting in New Mexico.

Wayne, an area rancher, stops to tell me I missed the turn-off on Klondyke Road, and I explain my predicament. He offers me a ride to the nearest town. He is quite familiar with the geography of the nearby GET, from talking to several other hikers, and asks perceptive details about the route out of Superior.

In town I find a Safeway with Wifi, and call family for a pick-up. Because of issues at home this turned out to be the right decision. While waiting I continue walking to keep warm, all the way to Safford.The weather has turned cold and windy, quite a change from the heat wave of a few days before. While waiting I have plenty of time to meditate on the malevolence of the person who took my supplies. What motivates such an act?

I make it home to sleep in my own bed– not how I imagined this day would end.

But before resuming the Grand Enchantment Trail, I have a little surprise hike planned. Just you wait and see!