(In preparation for my attempted completion of the AT for summer 2012, I went back and transcribed journals and scanned photos from my 1988 hike. Good research to see what I could do better. Presented in three posts.)

Up until 4AM bagging food, and still not through! Woke up naturally at 9AM and finished the job, then finished packing and cleaning apartment. Out (finally!) at 6:30PM to Kentucky, with car filled with 20 food boxes and stuff.

While cleaning, Sushi (my feline overlord) slipped through the window with a live bird in his mouth. He took it over the the corner and played and nudged it, then dozed with one paw on bird. Occasionally bird would revive and whimper, which would get the cat’s attention. 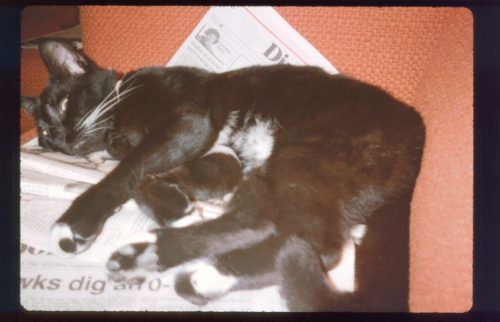 Just as we left the house, Sushi jumped through the open sun roof. Nearly lost him when he bolted.

Coming up to parents’ house.

6/6 Mon– Springer Mountain Shelter 0.2 (numbers in heading are miles from Springer Mountain)
Dad suggested we leave today since he would have difficulty leaving tomorrow (I gave them the option.) On road by 8:30AM, to Atlanta apartment to pick up pack and leave key, and get more boxes, then to Nimbelwell Gap. Dirt road was rugged but not too bad, and we saw a doe.

The trail was alive with grasshoppers! 75 degrees F at start at Nimblewell. 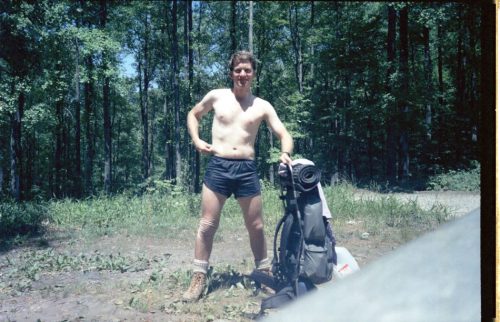 Pinch test at start of trip

Maybe tonight I can catch up on sleep lost during past two days.

Can I really be attempting this thing?

All the annoying bugs and dense undergrowth sure make the trail seem unfamiliar. I am used to Spring conditions. (ed note: I had previously done this section of the trail during Spring Break as a training hike.)

(ed note: Trip journal entries, for reasons of portability and weight, are written in Day-Timers Junior with two small pages per day, and require tiny writing, abbreviations, and copious sentence fragments in place of formal prose. Rather than long philosophical discussions, text tends toward more prosaic matters: “Boots are soaked again!” We choose to reproduce entries with only minor edits.

Entry headings are the final arrival location for that day.

Later explanatory notes are in italics. ) 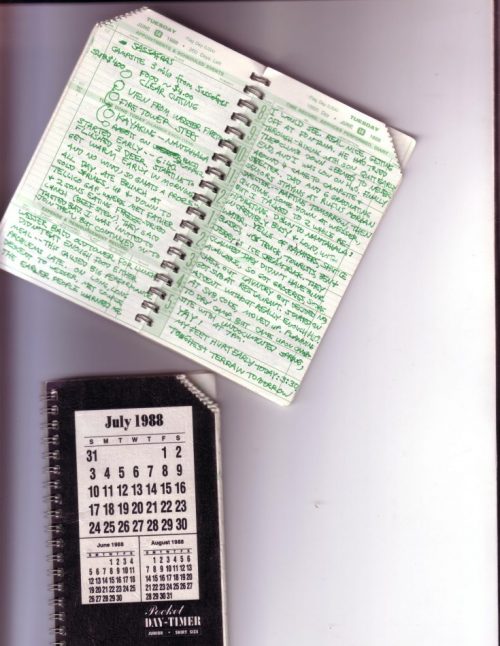 Spent night in solitude at Springer, having seen no one on trail.

Kept seeing one couple several times today, we kept similar pace, and kept passing each other. They may have stopped at creek instead of coming here. 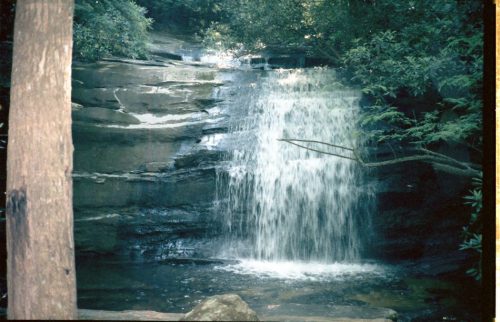 Steve Johnson, of Philosopher Guide fame, came up to talk, and see if any hiker was up here needing his services. He spends his days shuttling hikers to Suches, etc. Real nice guy, mellow, with beard. Blood pressure problems prevent him from hiking trail any more.

No rangers on trail today.

Will my bod make it to Neels tomorrow? 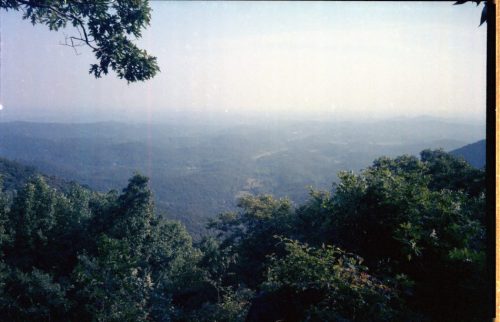 Steve Johnson was waiting for customers at Woody Gap. He got to talking about lots of things; showed me some arrowheads.

Really glided up the first mountain. Blood was harder. 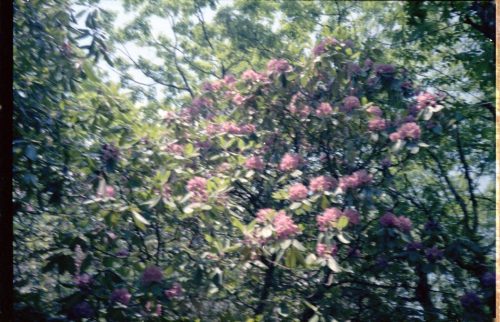 Ate lunch walking to make Neel’s Gap in time for dinner. Good view on top of Blood– lots of rocks and mountain laurel, blooming azaleas(?), stone shelter, descent very steep and rocky and hard on the feet. Hostel was closed! Aargh, argh, gack! The normal couple was on vacation. Visions of spaghetti were getting me across those mountains. Acute disappointment. Got some groceries and coke and retired to grounds behind the hostel with a nice couple my age. Peter, getting his PhD in English, and Joy starting her Masters in Public Relations, from Louisiana. They are going slow, plan to get to Damascus. Water turned off at hostel fountain, but employee came out and gave me water.

Waited for Neels to open at 8 and got some more groceries, just in case. Send spare shorts home and tried to call home.

Hit the trail after 8:30, eventually caught up with Peter and Joy, and gave him a knife he accidentally left at a spring, and her a coke I promised to bring her. Left them around 10:30, 11, continued on mostly level trails most of day, ridge-lines and old logging roads. Breeze kept most of the gnats grounded– yeah(!), but not grasshoppers. Clouds started moving in, temperature eventually starts declining, thundershowers possible. Stopped by Low Gap Shelter, met Trail Rat relaxing in a hammock, out for a short excursion. He talked about huge egos in Smokies, warned me about two people in next shelter, packing a gun. After a long walk, finally crawled to Rocky Knob, joined two people: Bus, mentioned by Peter and Joy, and Harold(Spuds), from Harrisburg PA.

Oh yes, I’m pretty sure i saw a bear way down from the top of a ridge, moving at impressive speed away from me!

Harold (Spuds) left early, then me at 7:15. Bus caught up with me shortly, but lagged behind for breaks. Two big climbs and descents. Cool morning, no insects. Caught up with Harold at Moniray. spent hour there for lunch. Joined shortly by Bus. Nice grassy area to catch rays. Next part of trail had gradual up and down, with lots of grass and fern as undergrowth. Saw group of grouse, lone birch tree a few maple trees now appearing. 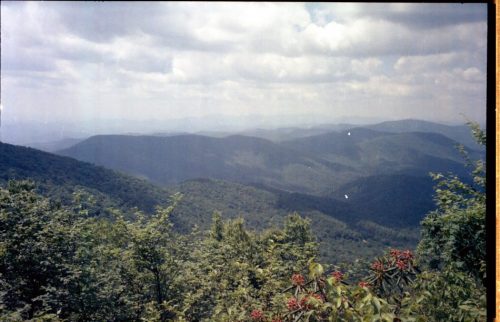 Got in to camp at Addis early enough to clean everything, including myself. 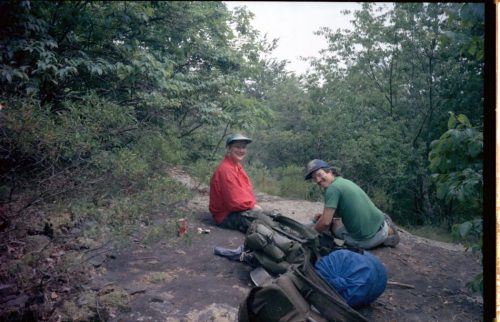 Spuds and Bus at Addis Gap

Left earliest today, but was noon passed by Spuds. First part of trail was brisk climbs and descents. Caught up to Spuds talking to a couple. She was tiny, but had a pack like mine. he was an army captain– had one lung removed due to a training accident, but after therapy he could do marathons and hikes. Spuds told me later the captain’s pack was HEAVY, around eighty pounds. After a Very long descent at Dickie Creek, Spuds and i parted company. He was quitting trail because of equipment dissatisfaction. (His feet were heavily blistered.) He planned to do trail in sections. Didn’t see Bus, but he had a stash buried at Dick’s Creek and would probably be moving slower. Met a couple hiking my direction with a dog (Alaskan type), going around 10 miles a day. They were quitting at Winding Gap. He had a pistol. She was from Damascus, and told me about their nice hostel.

Met two day hikers going in opposite direction, said trail was easy. HA! After some gradual ups and downs (a couple of patches of pines)(didn’t see much wildlife– lost in thought) came to climb at Courthouse, Bald Gap, and hardest section of trail so far. Really dragging by arrival at shelter at 6:30. OK after bath and food.

Bad news; Behind schedule for first time today. For some dumb reason I had twenty-four-plus miles scheduled. Between Wesser and Fontana I should fall further behind. Make it up in Smokies. (Ace the final.)

Tried, but couldn’t get out of camp before 7:40. Mostly flat or gentle trail until Albert Mountain, but laurel so thick I couldn’t see anything, including wildlife, so just walked. Passed three at Standing Indian Shelter going my way, but they still hadn’t finished packing. Saw man with two dogs, and a biker. no one else. Trail not as well maintained as in Georgia: overgrown trail, etc. Morning cool, a few gnats, and first mosquitoes sighted in afternoon. No clouds. No grasshoppers for first time all day. 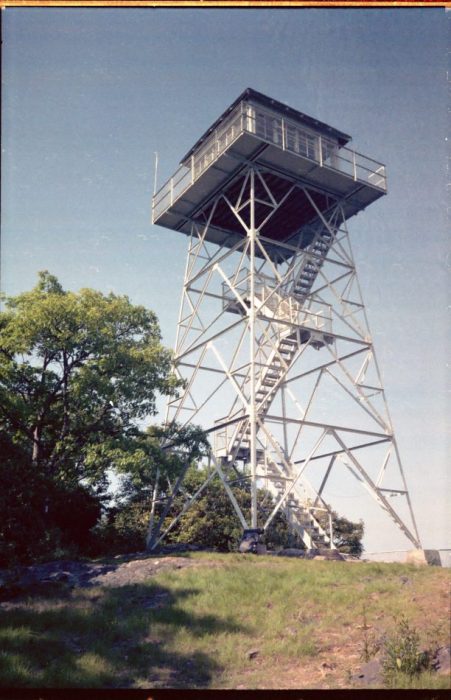 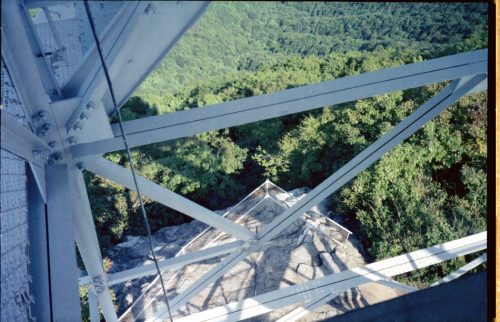 View down from fire tower 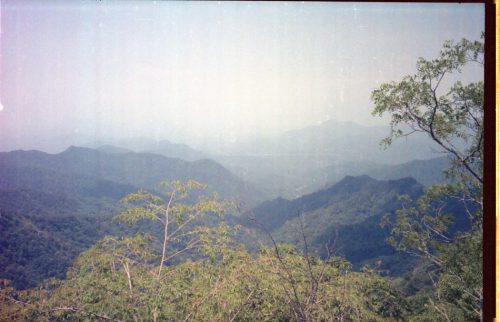 Got into camp around six, not quite enough time for next shelter. May detour into Rainbow Springs Campground tomorrow to call folks and get more grub.

A youth group of about thirteen teens set up camp just out of sight of the shelter shortly before dark. Nice quiet bunch, ask questions to-and-from watering hole.

Broke camp at 6:45, a record. Youth Group still unconscious. Another group at Rock Gap Shelter also out. Tried walking into Rainbow Springs Campground only to discover I had started from Rock Gap instead of Wallace Gap. The gaps are just fifteen minutes apart, and Rock Gap has no identifying sign, like so much of Nantahala. Went to Wallace Gap and one mile down to Rainbow Springs Campground. A real Mom-and-Pop operation. No other visitors visible; dogs warned of my presence. Surprised Mom and Dad with early phone call, told of my progress. Boxes on way; Sushi fine. KK letter in Box 3. Aarghh! Lady in store real nice, came out to greet me. Small selection of groceries, but just exactly the things needed by hikers, even Scorpion (ed note: name of my model backpacking stove) butane! I was getting really low due to planning oversight. Got cinnamon roll to eat while writing a half-dozen postcards outside on picnic table. Back to trail, surprised grouse at five places on trail– what a humorous act they put on! Trail more challenging than yesterday, but I was really moving. Oh yes, twice groups stopped and asked me about my trip. Toward end of day, really low on water, with steep climb finally found Wine Spring. (Appropriate name to me!) And decided not to go on two miles to next campsite.

Started early– 6:40. Flushed three deer. Starting to get warm early in morning and no wind, so gnats a problem all day. Ate brunch at Cold Springs, up and down to Tellico Gap, where met father and two sons eating freeze-dried lunch (beef stew). They said tasted bad. I was invited to join them but continued on to Wesser Bald old tower for lunch. 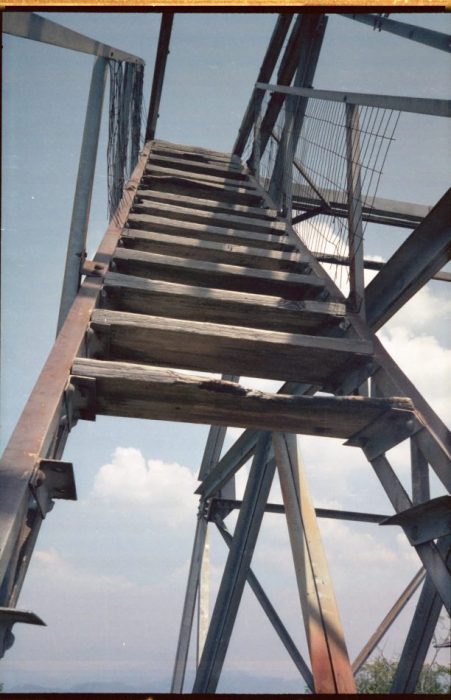 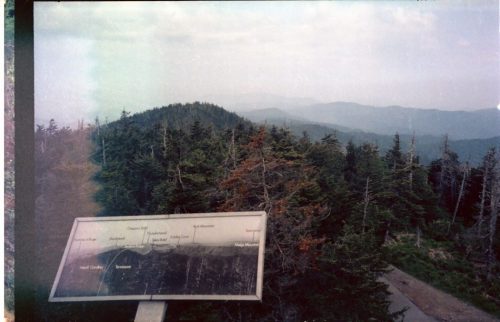 Didn’t eat enough food either meal– this caused big problems later. On long, long descent to Wesser, met couple the earlier people warned me I would see. Real nice, getting off at Fontana. He had tried through-hiking with son, quit early.

The climb down seemed to never end and I was low on water. Finally around 4 came to campsite and shelter. Dad and six graduating senior staying at Rufus Morgan Shelter– rafting tomorrow, then quitting. Some down at Wesser. But I talked to two while re-hydrating. Down to Nantahala: incredibly busy and loud, with water, yells of kayakers, shuttle buses, UPS truck, tourists, Ben and Jerry’s Ice Cream truck. 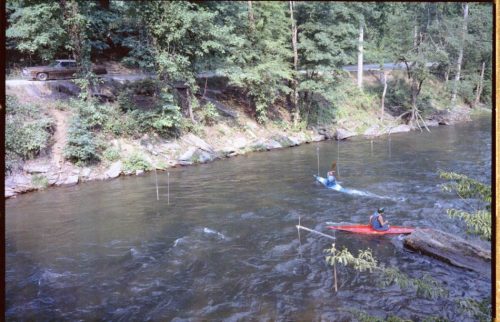 They claimed they didn’t have bunk available, so got groceries, sodas, checked out laundry but decided no, got sub at restaurant. Started on ascent without really enough water. Ate sub, coke, moved up. Planning to dry camp, but came upon campsite with undocumented spring (Yay!) at 7PM.

Last night fireflies came out around 10 and gave a little magic show. A few buzzed around all night. Then some birds sang out. Late at night heard a nerve-rattling “AAOAR! AAOAR! AAOAR!” then squeaking, then the same call further away. I figure it was some type of owl out hunting.

Next day: up and down, up and down, very steep, hard on knee. Both knees complaining for first time on trip because of long descent yesterday. Saw three out with butterfly net, met Scout troop and through-hiker laying on trail after Stecoah Gap. I went on.

Very very very steep climb now. Through-hiker, Aussie caught up with me during 3PM foot-break. Rob, great guy, 70 pound pack! Really in shape. He joined me rest of day– me slow on downhill, knee painful now, and him slow on uphill due to pack. I estimated we would get to shelter by 6; we got there at 7, absolutely exhausted. Scouts must have mis-estimated distance and had to dry camp. This was the hardest day physically on trip. From map, Smokies don’t look so easy. May need to spend R&R day.

Hard to sleep; my tossing and turning must have annoyed Rob.

Rob, 45, sleeveless shirt, used to work in outback. We came across huge fat black snake in middle of trail. I jumped over it. “You’re game, aren’t you?” He wouldn’t jump. In Australia, any color snake can kill you.